In praise of the tray bake...


This last weekend has passed in a baking frenzy... And, rather than the usual cupcakery or victoria sponges, it all revolved around the humble baking tray.

Firstly, on Saturday, I tried a focaccia recipe - to take as a contribution to our friend's dinner party.  A few years ago I had enrolled (in a fit of pre-wedding domesticity) on a one-day bread making course at Hugh F-W's River Cottage.  So I dusted off one of the recipes I learned there (with a few crucial adaptations, such as adding about half a pint of olive oil rather than just a tablespoon!).  I prepared it at home (in mega quick time for bread dough - it seemed to rise very quickly) and baked it at my friend's.  The recipe calls for:
500g of flour (I used half strong bread flour and half plain white flour)
5g of dried yeast (I used a whole 7g sachet)
10g of salt (important for taste!)
375ml of warm water
1 tbsp good olive oil (I used much more - probably almost as much as the water!).

I used my Kitchenaid dough hook to mix and knead the dough for a good ten minutes.  It then had a first rise of about an hour, before being knocked back and pressed into a well-oiled tray.  At my friend's house (after a second rise of around half an hour) I pressed my fingers into it (satisfying!) and added olives (to one half) and lots of rosemary and sea salt.  We then cranked up the oven to 260 degrees and baked it for ten mins at this high temperature before reducing the heat to 200 and baking for a further 20 mins (the recipe said just ten, but I found it a bit soft on the underside). 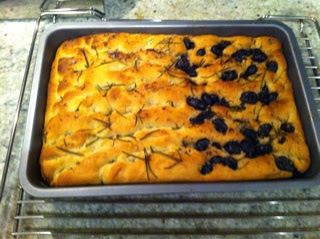 We managed to let it cool for ten tantalising minutes before devouring.

On Sunday (with a groggy head) it was then on to the sugary side of business.  With the first PANDAS support group meeting on Tuesday I was keen to start preparations.  So in the morning I began with tablet.  This is a peculiarly Scottish treat, much like fudge but with a distinct sandy texture.  I used Felicity Cloake's Guardian recipe, which is relativBely straightforward (especially with the aid of a sugar thermometer and hand mixer).  You start by boiling a kilo (yes 1kg) of sugar with 125g butter and about 250ml of milk for 8 minutes, and then simmering it further to get it to the required 115 degrees ("soft ball" stage on the sugar thermometer).  You then add a tin of condensed milk and mix vigorously until it thickens.  You pour the lot into a well buttered tray and leave to set. The result is seriously sugary, but a little morsel goes a long way! 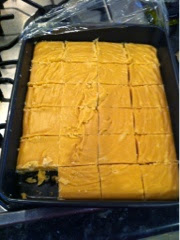 (Where could that little square have gotten to...?)

After a lovely Sunday lunch with friends, it was back to the kitchen to whip up a brownie.  Now, I used to work for my friend Bea in the bakery of her small chain of cupcake/coffee shops "Beas of Bloomsbury".  I have adapted her spectacular "killer" brownie recipe, used in the professional kitchen, into a plainer affair for home.  I start by melting 250g of stork (why use expensive butter when margarine works equally well?!) over a high heat.  I pour that over 250g of small chocolate chips (I bought a large catering bag of dark chocolate chips the last time we went to Costco - it is much cheaper, and easier to use, than individual bars).  Stir to mix, until all the chocolate has melted. Meanwhile I beat 4 eggs with 250g of white sugar and 250g of dark brown sugar.  Using the dark stuff gives the brownies a gorgeous fudgey/caramel taste.  With the mixer running I pour in the melted chocolate/butter and finally add 250g of plain flour.  This all gets poured into a lined tray, to be baked for ten minutes at 200 and a further ten minutes at 170.  You are aiming for a slightly glossy, cracked in places, top: 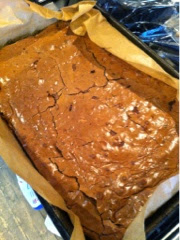 Finally, today, I thought I'd better produce another option for those who don't want to be assaulted by sugar and chocolate.  I turned to my favourite lemon-based recipe of choice these days: Fiona Cairn's Very Lemony Crunch Cake.  She makes it in a round tin, but I think this recipe is like a lemon-flavoured brownie (in texture and baking method) and it lends itself to a square baking tray.  You start (similar to a brownie) by melting 175g of butter (Stork!). Whip 2 eggs with 175g of caster sugar, for about five minutes, before blending in the melted butter.  Then lightly fold in 175g of sifted self raising flour, as well as the finely grated rind of one large lemon.  Finally, mix in the juice of that lemon.  Pour into a greased and lined tray and bake at 180 for about half an hour.  When it comes out, prick all over with a cocktail stick and pour over a lemon syrup which is simply 100g of sugar mixed with the juice of another lemon.  The result is a super-light but very moist lemon drizzle slab: 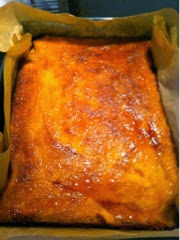 I think we are almost ready for the new support group!  I have looked out some of the boy's old toys to take along.  And I have even invested in some Monmouth Coffee, filter papers and individual filter cones... 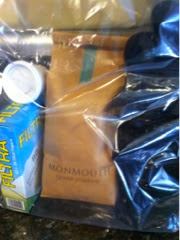 I am stressed and anxious, as if I were planning a party and worried no one will show up. I have no idea how many mums might come along, but the good thing about all the baked items above is that they can stay in their trays, they all keep well, and then they can all be frozen if no one eats them!  The joy of the humble tray bake.

Email ThisBlogThis!Share to TwitterShare to FacebookShare to Pinterest
Labels: Cooking