I caught up with Claudia Hammond's wonderful "All In The Mind" radio programme this morning.  They were discussing the funding crisis in mental health care in England.  Many problems and issues were raised: from the lack of crisis care beds, through to nonexistent youth services and a postcode lottery of care.  But not one of the policy makers interviewed seemed to offer either a solution or, indeed, a sense of responsibility over the current state of affairs.  Norman Lamb (Liberal Democrat MP and coalition health minister) professes to be "angry" about the state of mental health services, but claims he is powerless. Jeremy Hunt (Secretary of State for Health) has met with mental health charities and service users, and has claimed to want "parity of esteem" between physical and mental health care... And yet.  And yet...


Who is in charge?  Who can make the changes so desperately needed?

The NHS in England is structured in such a way as to make personal responsibility for budget size and allocation nigh-on impossible.

According to government ministers on last night's programme, the responsibility lies with the body now known as "NHS England".  Ok, great.  They have a website, surely I can find out on there who is responsible?  A frustrating hour later it is clear that NHS England is about as well organised and structured as my toddler's playroom.  I counted no fewer than nine different organisational structure diagrams, and not one of these was linked up coherently to another.  There was no sense of who, for crying out who, was actually in charge of allocating funding to mental health.  We know that NHS England is mandated to both commission health services directly and to assist and support local Clinical Commissioning Groups (the heirs to PCTs).  It receives its mandate (its objectives) from no fewer than ten separate "frameworks and agreements" - only one of which, helpfully, is called "the mandate".

NHS development has, over its sixty year life, been piecemeal.  And the (dis)organisational structure of NHS England is the result.  They embody the latest in a succession of "modernisations" - which have all resulted in not one person or team being held accountable for the current state of mental health care.  Who knew, but apparently it is entirely modern and right that no one person should ever be accountable for such a large budget and such large responsibilities.

So, I guess we have to go to the governing "Board".  There appears from the NHS England website to be around 15 members, with a variety of management-babble-speak job titles to suit their impressive CVs.  Could it be that this committee, this round table, are the culprits/saviours of our mental health care? 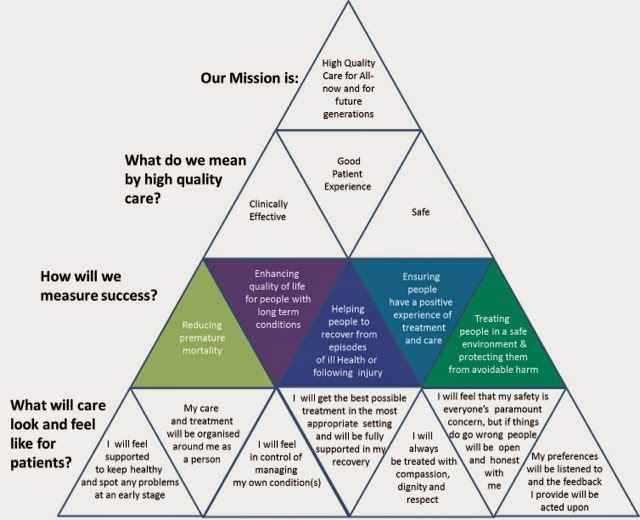 On their measures of success, mental health care services is an obvious investment: mental illness is a leading cause of mortality and morbidity (especially in the under-65s); and there are established, evidence-based, cost-effective, treatments ready to be commissioned.

So, come on NHS England.... Stop messing around with further discussion documents and vacuous press releases (got to love this one, published in March to coincide with the launch of "parity of esteem", which talks gamely of "concordats" and "leadership").  Just get on and FIX things.  Please.

Post-script: I have just signed up for "NHS Citizen", a new platform for engagement with NHS England. Have a look here.