Kathryn is always keen to share her story of mental illness and wellness, and to increase awareness of postpartum psychosis in particular.  She is a media volunteer for the charity Action on Postpartum Psychosis, and has also taken part in the Time To Change "Can you tell?" campaign for Rethink Mental Illness.  Kathryn is happy to hear from any journalists or editors with an interest in mental health. 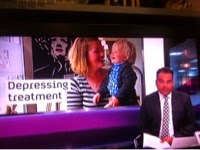 Kathryn has presented on "Motherhood and Madness" to Bournemouth University's Festival of Learning conference on maternal mental health.

Email ThisBlogThis!Share to TwitterShare to FacebookShare to Pinterest
Labels: About me