As regular readers of my blog will know, The Boy is an avid park user.  So when a group of playgroup parents got together to try and redevelop a local park, of course I had to get involved.  The playground in question is the one right in the grounds of the Imperial War Museum - one of London's top tourist attractions, but also an important community resource (lying between Southwark and Lambeth boroughs).  The playground isn't "bad" - but it could be so much better.  There is the potential for not just a state-of-the-art play facility, but also community space, a youth club, sports activities and all sorts of other events.

After just three meetings, the group has already secured initial grant funding, and an agreement from the Council to reopen the disused One O'clock Club building that lies adjacent to the playground, for a trial period over the summer.  The next stage is to raise further funds through grant proposals, and general fundraising.  To this end, and with my former management consultant hat firmly in place, I wrote the below words of support.  Watch this space for more news on the project - we hope very much that our ambitious plans will come together very soon.

What about near where you live?  Is there a park or open space that could do with some love and attention from the local community?  You may be surprised by how amenable the local council is to plans coming directly from local parents.  Get out there and get involved!

What is the "want" for this project? Who will benefit?
The park sits in the borough of Southwark, adjacent to the Elephant and Castle district.  It boasts the important historic, educational and cultural attraction: the Imperial War Museum.  We believe that by developing the playground within this Park, and by re-establishing a new and improved programme of activities in the (currently) disused One O'Clock Club building, we can provide significant benefits to the local community.


- there are (according to www.ukschoolfinder.com ) a total of 26 primary schools within a 1-mile radius of the park, catering to thousands of local 3-11 year olds.
- the Museum itself attracts visitors, young and old, from around the world: over a million people, every year. (See IWM Annual Reports)
- Southwark, and neighbouring Lambeth, are two of London's most diverse and challenging inner city boroughs.  There is a real need for both usable outside play space, and for activities to engage the local communities. The Southwark Open Space Strategy 2013 states that "parts of the borough, including... Elephant and Castle... [are] in greatest need for good quality outside space to help address socio-economic issues."
- the beneficiaries of this project will encompass a wide range of ages and backgrounds, but we expect to benefit especially young families with pre- and primary- school-aged children.
- the population of Southwark is projected to grow by up to 19% between 2011 and 2026.

Benefits and Outcomes
Having carefully read the Southwark Open Space Strategy 2013 we strongly believe our project is not only complementary to the wider strategy - but vital to it.  The project also complements NHS Southwark's Strategic Plan 2010-2015 (which seeks to improve health and increase levels of physical activity within the borough) and the Southwark Play Strategy (which "aims to promote the creation and maintenance of stimulating and challenging play environments that enable children and young people to develop their physical and social abilities").
Objectives in the SOSS2013 include (these are the broad objective headings, the document lists more detailed objectives under each):
- Enhance provision to meet the needs of an increasing and changing population
- Health and Wellbeing
- Regeneration
- Biodiversity
- Community Cohesion
- Tackling Inequality
-  Education & Culture
- Heritage & Design
- Climate Change.


We have ambitious plans for the Peace Playground, which we hope in the medium to long term will help achieve ALL of these objectives.   Fundamentally, we hope to encourage the use of high quality open space (in an area with the highest proportion of residents who currently do not access open space: 19% and 15% in Walworth & Aylesbury and Elephant & Castle respectively, compared with just 2% in Dulwich).

We hope to provide a programme of events and activities which inspires, challenges and enthuses local children and their families.  As the Strategy states, "open space can also represent a source of wider social benefits and cultural value... can help create a sense of community... can provide opportunities for social interaction and the development of social capital..." And we hope to achieve all this through maximising the historical and cultural importance of the site.  We will create a heritage play space of world-leading design and in sympathy with the local environment and local community and their needs.

A playground for peace, in the shadow of the Imperial War Museum. 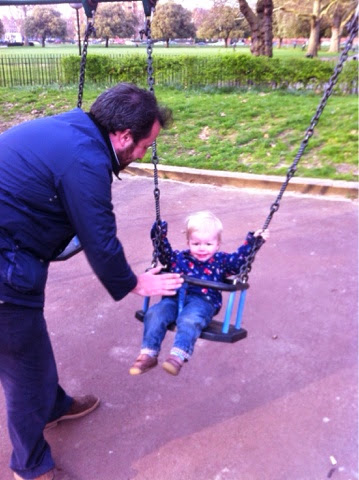