The husband is turning thirty-something on Friday, so thoughts are naturally turning to birthday cake...

I was visiting Konditor & Cook yesterday and saw they had a new line in their celebration cake range: dark chocolate and hazelnut, with a noisette frosting.  Wow.  That could have been made just for the husband - right up his street!  But given the cost (£38) and the fact that I don't work, I was determined to try and replicate this at home.  Before I get down to Friday's business, however, I thought it'd be instructive to look back on some previous efforts.

Here, in no particular order, are some of my favourite chocolate cakes...

Chocolate buttermilk and raspberry layer cake
This is as much of a "show stopper" as I'm ever likely to make.  The sponge and ganache (and buttercream) are all from my friend Bea Vo's "Tea with Bea" recipe book (available here).  I made the sponge as directed, and sliced horizontally into 3 layers and left to cool.  I then ganached each layer with a thin layer of dark chocolate ganache, before sandwiching together with fresh raspberries and a fluffy chocolate buttercream.  I worked in Bea's kitchen for some time, before having the boy, so I am quite familiar with a "professional" style of buttercream.  This stuff takes a little longer to produce, but lasts much longer and looks so much better than standard buttercream.  It is well worth the effort! All you need is a decent stand mixer and a sugar thermometer... 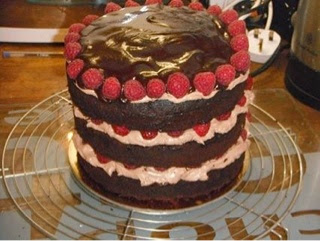 I presented this to the husband on his birthday two years ago, and it went down incredibly well with a glass of bubbly!

Green & Blacks chequerboard cake
This recipe is taken from the G&B "Chocolate recipes unwrapped: from the cacao pod to muffins, mousses and moles" book (available here).  It's in the "Time To Shine" chapter, and it is a pretty flashy cake.  Taste-wise it is not too rich, so would be ideal for a children's birthday party.  It is essentially a vanilla/chocolate marble cake, but the two mixes are combined by icing them into the tin in circles: 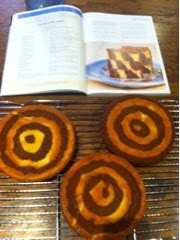 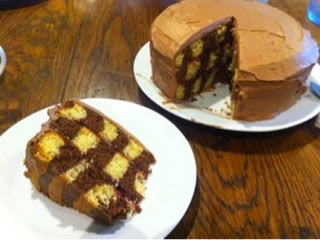 I was very pleased with the end effect!  It is a very satisfying way to practice your piping skills...

Andy's chocolate cake
There's a bit of a story behind this one.  Essentially I was tasked with producing a cake to impress my little sister's new boyfriend.  The brief: "he loves dark chocolate!"  So I googled "ultimate chocolate cake" and the first result was this 5-starred recipe on the BBC Good Food site.  We were not disappointed.  I used 1.5x the quantities, to make a cake large enough for over ten people.  In total, 3 x 150g bars of good quality dark chocolate were used.  The result was rich, smooth and deeply chocolate-y.  I have to say I didn't do a great job on the presentation, but no one seemed to mind.  Andy appeared to love it, and that was all that mattered! 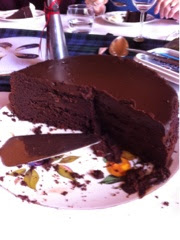 And also with Becoming A SAHM's

Email ThisBlogThis!Share to TwitterShare to FacebookShare to Pinterest
Labels: Cooking