Today, we took The Boy to one of his favourite South Kensington museums (Science) in order that mummy could attend an exhibition I've been interested in seeing for a while:

"Mind Maps: Stories from Psychology, explores how mental health conditions have been diagnosed and treated over the past 250 years.

Divided into four episodes between 1780 and 2014, this exhibition looks at key breakthroughs in scientists’ understanding of the mind and the tools and methods of treatment that have been developed, from Mesmerism to Electroconvulsive Therapy (ECT) and Cognitive Behaviour Therapy (CBT) bringing visitors up to date with the latest cutting edge research and its applications."

It's not a huge exhibit, and you can easily complete it in half an hour while the baby naps (hah, I wish!).  There is free admission (and it is open until October 2014).  It is informative and accessible, but I have to admit it left me wanting to know more ("Er, isn't that the whole point of museum exhibitions...?" - Ed).

I came away feeling that we had an interesting collection of artefacts to look at, loosely grouped by the contemporaneous state of psychological thinking.  But I wanted it spelled out: how has our understanding of depression, say, or schizophrenia changed over the years?  I learned the names of the big pioneers of psychology and psychiatry down the years, and their key professional advances, but I'm not sure I learned how it all joined up.

And it's a fascinating subject.  Today's physicians (and their beliefs) are unrecognisable from their 18th century counterparts.  In the field of depression, for example, we have come a long way from Burton's "The Anatomy of Melancholia".  Through "nervous spirits" and "weak
mindedness", through the chemical imbalance explanation (and resultant pharmacology), the biopsychosocial model and beyond ("Diatheses-Stress" model, anyone?).  And in schizophrenia too: we have moved away from demonic possession (or divine punishment), through a bodily humour imbalance, through Freudian theories of childhood trauma, and now our modern acceptance of psychosis as a biological disease of the brain.  The disease is not new, but our understanding of it is.

Only from the brain springs our pleasures, our feelings of happiness, laughter, and jokes, our pain, our sorrows and tears … This same organ makes us mad or confused, inspires us with fear and anxiety… —Hippocrates, The Holy Disease

Another gap in the exhibition, for me, was the patients themselves.  Who were they, and how were they treated beyond the couch/operating table?  How did people with mental illness survive and
live in the world?  And when the various treatments were finished - ECT, mesmerism, pharmacotherapy - what happened to the patients next?

We learned a lot about how scientists have "mapped" the mind, and discovered more about brain matter and nerve impulses, but I didn't think the exhibition explained how this emerging science impacted (if at all) on the lives of patients.  We are told of the different "treatments" meted out to them, but not the "care".  And if there is one thing I've learned as a mentally ill patient, it is that mental health care is much more fundamental to quality of life than any individual treatment.

This early advertisement for "electropathic belts" for the overcoming of "weakness" gives a tantalising glimpse into social attitudes towards "hysterical women": 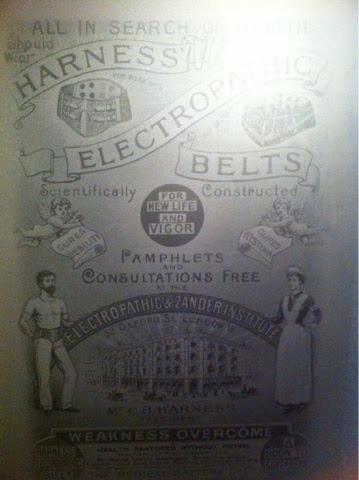 But what was life really like for the hysterical? The weak? Were they institutionalised and hidden away, or did these archaic treatments mean they could live in the world normally?

The one thing the exhibition makes clear is just how experimental the treatment of mental illness can be.  Has always been.  In an exhibition full of electrified frog legs and melancholy rats, human beings are the ultimate laboratory animal.  Mary Shelley was inspired to write Frankenstein, we learn, after witnessing an operating theatre performance of electric shocks on a fresh corpse.  In this context, pharmaceutical and psychotherapy advances seem enlightened.  But whether we are any closer to understanding how they work is another matter.

"Cornerstones in the history of major depression" in "Research and treatment approaches to depression" by Ma-Li Wong & Julio Licinio, Nature Reviews Neuroscience 2, 343-351 (May 2001)

Email ThisBlogThis!Share to TwitterShare to FacebookShare to Pinterest
Labels: Mental health, Out and About